An Open Letter to Motherless Daughters on Father’s Day

My father, Julian Edelman (not the Patriots’ wide receiver)

On the Motherless Daughters Community Calls, and at our  workshops and retreats, we spend so much time talking about our mothers that we often overlook the profound impact our father’s have had on us, too.

That’s something that I want to acknowledge and highlight, because it’s hitting me hard this year

Study after study reveals that the quality of care a daughter receives after her mother dies — which is often from her surviving parent — can have as much impact (or, sometimes, even more) on her long-term adjustment than the loss of her mom.

Makes sense, right? The loss is its own category of distress, but what comes next is critically important, too.

For all kinds of reasons, Father’s Day can be a loaded holiday for us: whether our fathers are still living or not, whether we’re estranged from them or communicate regularly, and whether they partnered again or remained single.

He was a lieutenant in the Army during the Korean War

Two weeks ago on a Tuesday call, in preparation for Father’s Day, we talked about four types of fathers: the ones who nurtured us, the ones who emotionally shut down, the ones who moved on quickly, and the ones who prohibited us from talking about our mothers after they died.

For a long time, my father fell into the category of what I call the “I’m OK, You’re OK” Dad. The one who pushed forward, never speaking about the family tragedy, and who focused on what needed to happen next instead of showing emotion around what had been lost.

But I also knew that sometimes he broke down in the car on his commute home from work, because it was a safe, contained place for him to let go and cry. My parents on the night they met in 1959.
That’s my paternal grandmother, Anna, on the far left.

This Father’s Day, for the first time since he died in 2005, I bought a card for my father and wrote a letter to him inside. I’d never tried to communicate with him like this before, but it felt like the right year to start. I’ve been thinking a lot about him lately as I prepare to live alone for the first time in 24 years, and also as I struggled with an unexpected cardiac event in May. I’ve been wondering how he felt when his youngest child left for college, leaving him to live in the family house alone, and also how he managed, emotionally, after having a heart attack at age 62.

For most of my adult life I worried about developing breast cancer, the disease that took my mother’s life. It had never occurred to me that I might one day identify with my father’s health history instead.

And, yet, here I am this Father’s Day: Thinking about my heart, its health, and my dad. 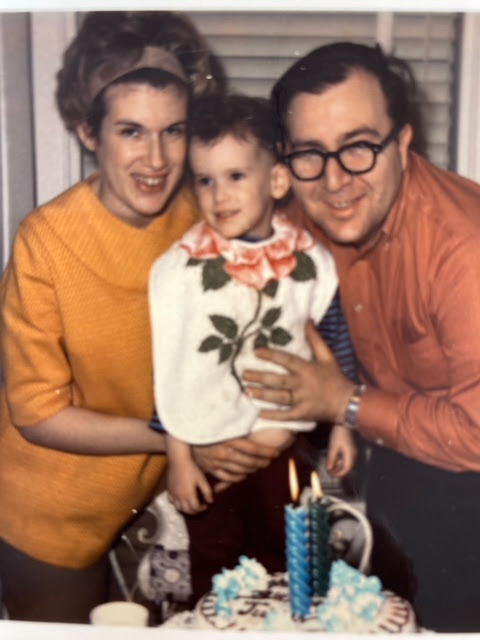 Celebrating my 2nd birthday with both parents

I never thought of my father as a courageous or resilient man when he was alive, but as my own story shifted this past year, I’ve also looked back on his and thought, He was so much stronger than I realized. I wish I’d recognized that when he was alive, but telling him in a Father’s Day card this year was so much better than not sharing it with him at all. It felt good, even — and offered a form of connection with him I hadn’t felt in a long time.

If you have a message for your father this Father’s Day, I encourage you to tell him in person if you can, and if you can’t, to write it to him in letter form. Especially if the relationship was a hard one, and you’ve got something you never felt safe enough to tell him before.

The most important part of this exercise may not be that he receives the letter, or how or if he responds. It may be what you get from saying what you’ve been needing or waiting a long time to say.

Sending very best wishes for a peaceful Father’s Day to you all — and hope to see you on a Tuesday call soon.

The AfterGrief: Finding Your Way Along the Long Arc of Loss, has been hailed as “perhaps one of the most important books about grief ever written.”

The AfterGrief: Finding Your Way Along the Long Arc of Loss, has been hailed as “perhaps one of the most important books about grief ever written.”